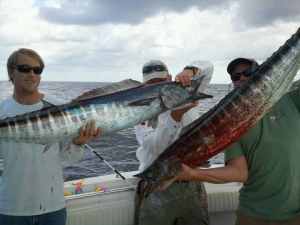 When it comes to Wahoo fishing i absolutley love it. We left the dock around 5 am Sunday morning and headed for the gulf stream!!! We had a 60+ mile run ahead of us and the weather was not cooperating. After an almost 3 hour ride we arrived at the steeples and deployed a spread of daisey chains, islanders and sea witches. The water temp. was 75 degrees, perfect for wahoo fishing. We had been trolling for around 2 hours with no luck and all of a sudden i see a very nice wahoo jump out of the water and crash on one of the baits in the spread and the reel began to scream. As i was handing the rod off the long line began to scream. We were hooked up with two Hoo’s. Talking about getting excited!!!!!!!! That was awesome. We finally got em close enough to the boat to were I was able to sink the gaff in them. The customers I had on the boat had never caught Wahoo before and they were absolutely shaking by the time the fish were laying on ice .. One gentlemen said that fish kicked my butt as he sat down to rest..We trolled a few more hours with no luck and the short rigger got slammed by a Mahi-Mahi and fight was on again. We didint catch a bunch of fish but the fish we did catch were very respectable in size. To book your Holden Beach Charter Fishing with Captain Kevin Sneed of Rigged and Ready Charters call me at 910-448-3474.